It’s time for another update about the work of the Downtown Billings BID! However, we have realized that our email updates over the last several months have been concentrating on the details of the BID street team’s work, and haven’t really given our community members the 30,000 foot view of the BID in a while.

The Beginning of the BID

In 2005, The Downtown Billings Business Improvement District (BID) was created by a large group of property owners because they wanted to work together on the upkeep of the newly streetscaped downtown. The boundaries of the BID were determined by which property owners were interested in assessing themselves a yearly fee to accomplish these tasks. The zone ended up being approximately eighteen blocks of properties. Here’s the map! 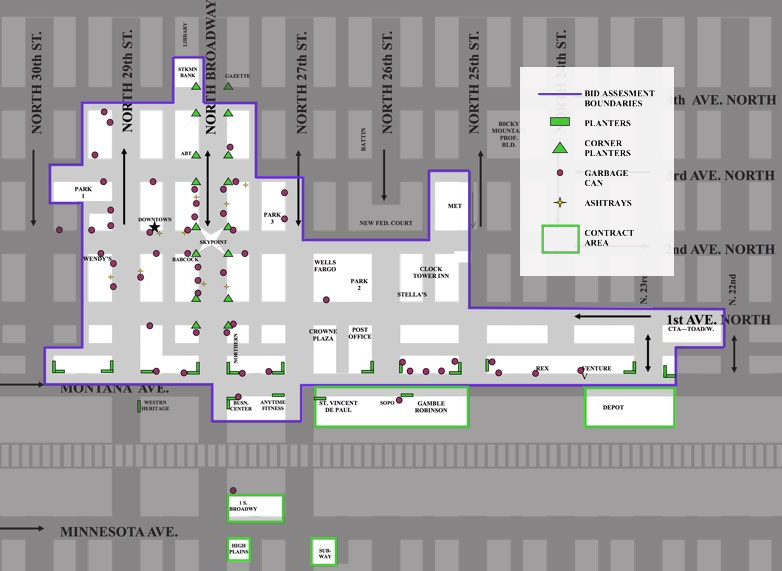 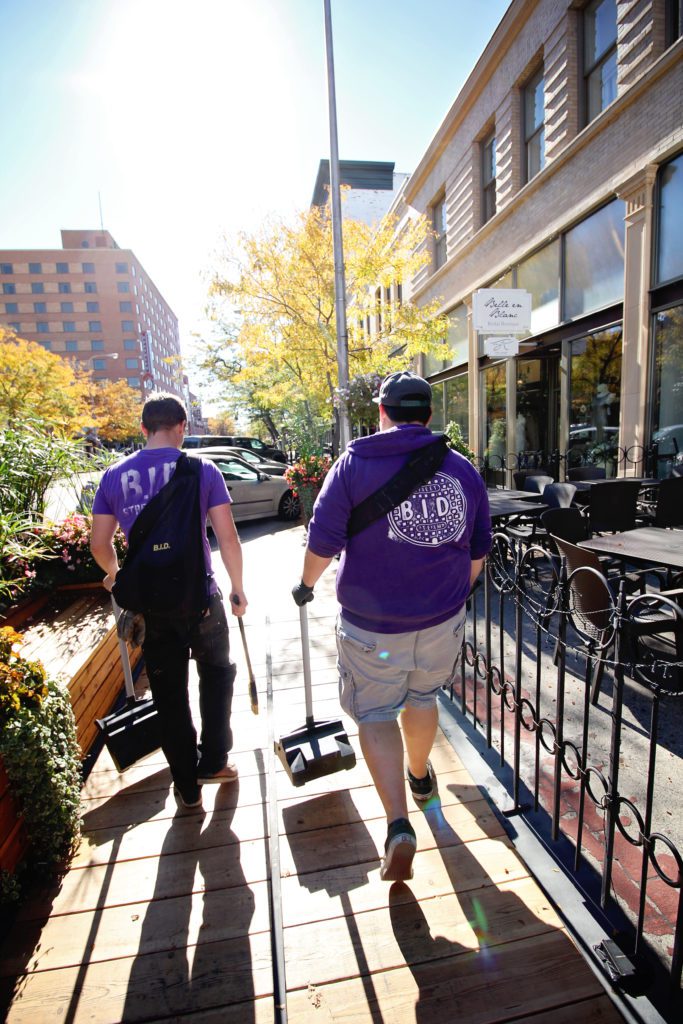 Our Commitment to Keeping Downtown Clean and Safe

In 2009, the BID began its cooperative safety program when it partnered with the Billings Police Department (BPD) by bringing on a BPD officer as the first downtown resource officer, accomplished in conjunction with the Downtown Billings Partnership who helped fund the first year of this pilot program. The new “Safe Zone” of the BID was added after to fund the cooperative safety program that expanded to two BPD downtown resource officers.

The downtown BID was renewed, per state law, after 10 years in 2015. The renewal process involves mailing out surveys to downtown property owners and receiving at least 60% returned marked with a yes vote. Property owners returned well over 60% approval, showing a strong support for the BID and its work.

The Work of the BID Street Team

The original scope of work for the BID was relatively basic, involving emptying pedestrian trash cans, plowing a 4 foot path on all sidewalks on snowy days, sweeping litter, and other general cleanup.  These things are still very much in the work plan, however, the BID continues to expand their scope of work and have added public art, the MAAP program, and Crime Prevention Through Environmental Design (CPTED), to the list of what they do. Occasionally, the BID street team will step outside their established work plan to help business owners move heavy items, repair displays, or help tow-out cars on especially snowy days. The team members are often referred to as ‘The Downtown Purple People’, because they often seen working all over downtown wearing their purple work shirts. 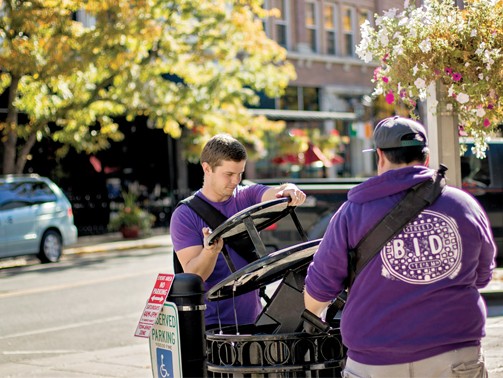 The team does all mentioned above and more on a tight budget, but thankfully as a team they are extremely resourceful! They build and maintain the majority of their own equipment. Have you seen that red trailer that we haul around behind our four wheeler? They built it themselves as a compact, one stop shop for all of their cleaning and watering needs. It has plumbing, electricity, a pressure washer, a toolbox, and a standard garden hose and sprayer. It’s basically Tony Stark’s Iron Man suit for the purple people. 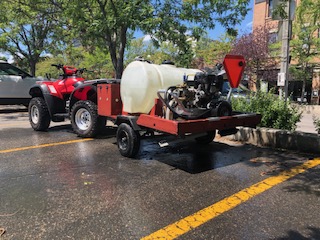 The BID has been blessed by a number of generous donations of tools and vehicles over the years, the most recent being the new snow plows sponsored and purchased for the team by Rocky Mountain College, these new plows are for the front of the their four-wheelers for plowing the downtown sidewalks during the winter. 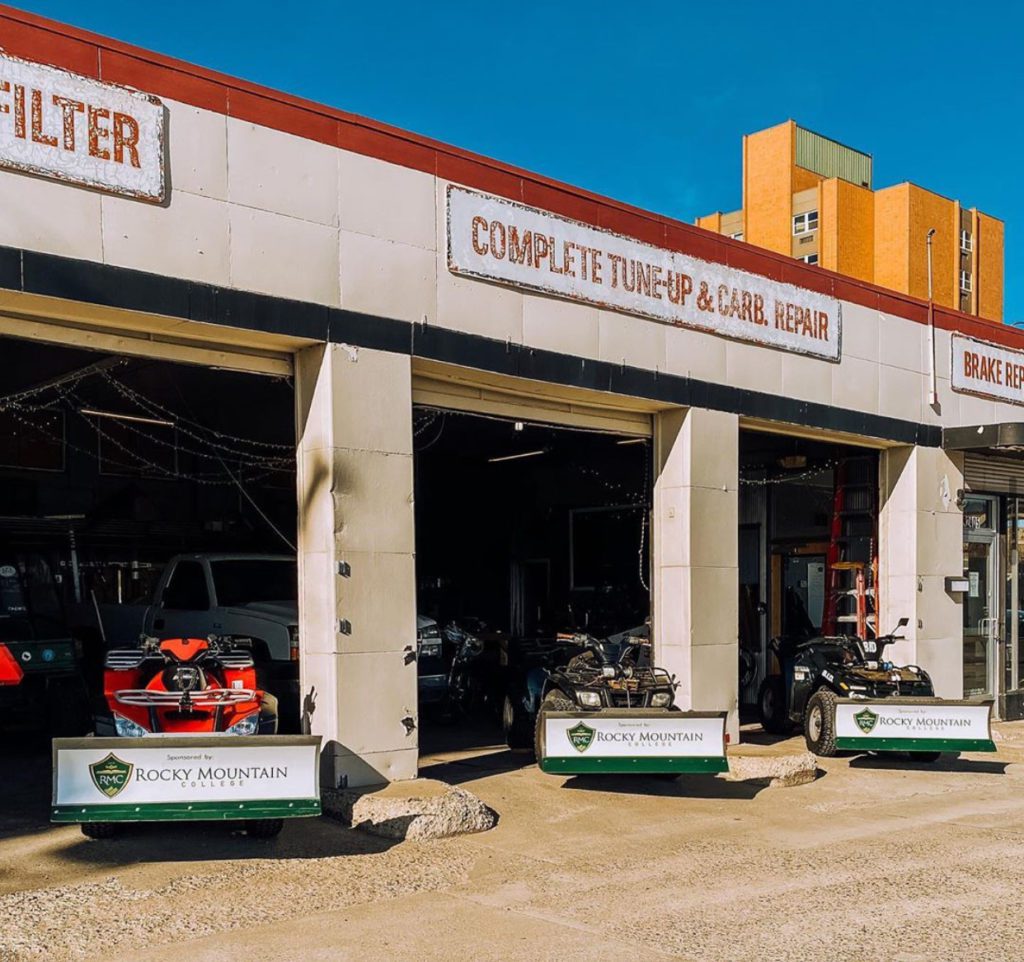 The BID also has an extensive flower watering program for the 160 beautiful flower baskets that you see hanging from light poles around downtown. Those baskets are paid for by the Downtown Billings Alliance through a number of fundraising sources, not the least of which is the green meter program. Every time you park and pay a green meter, a portion of what you pay goes to a cleaning and beautification fund for the BID. The parking division generously agrees to share a little bit with us to help us make downtown clean and welcoming. 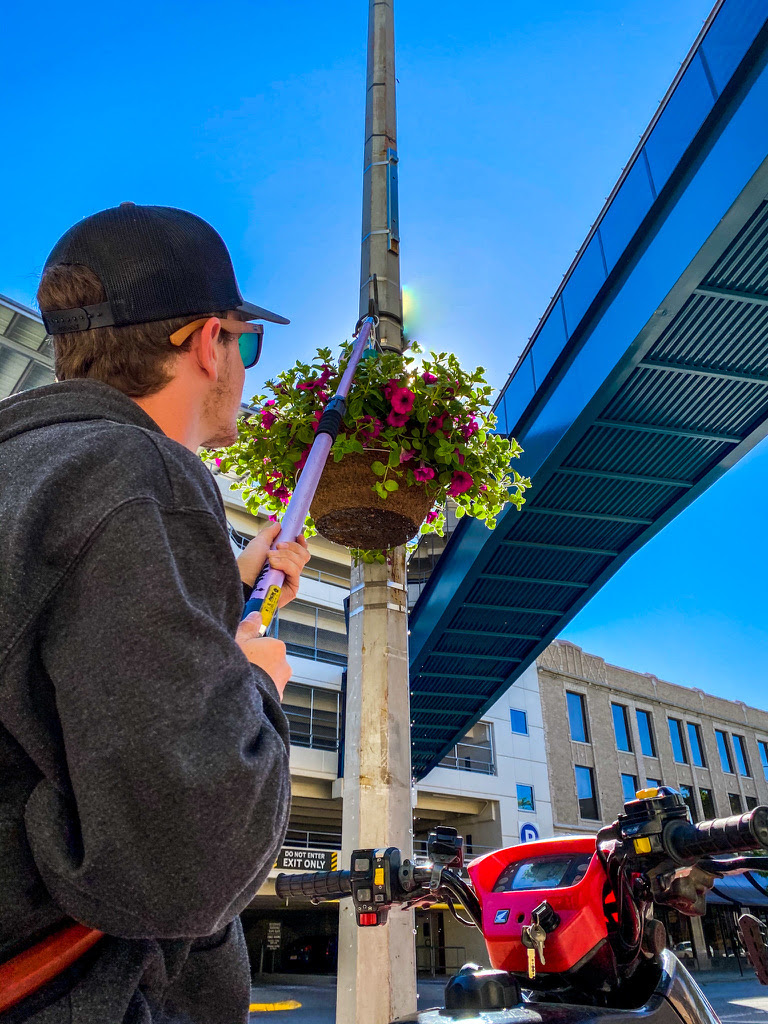 Graffiti removal is another skill and downtown clean-up task that the Street Team has honed over the years. They can completely remove graffiti tags from a myriad of surfaces; including bare brick, concrete, bare metal, masonry, glass, and many painted surfaces. Unfortunately, sometimes painting-over the graffiti is the only solution, but they give it their best shot before doing that!  The BID is limited to ground level work, but will certainly consult with a property owner if there is some tagging up higher. 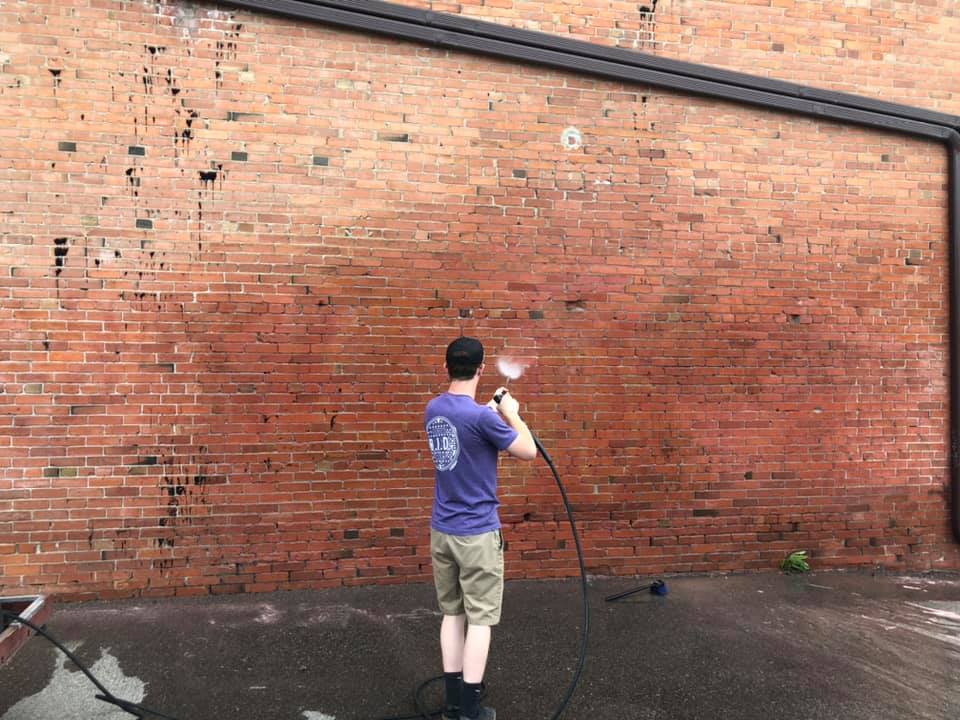 Important Graffiti Tip: If you have tagging on bare brick, don’t paint over it with brick red paint! Call the Purple People, they can help you remove it! 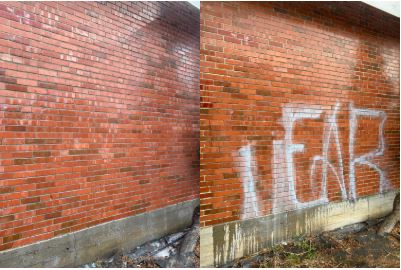 When it comes to snow removal, the BID’s work plan remains the same. The team members arrive as early as they can on a snowy morning to clear a 4 foot wide path on every sidewalk in the clean and safe zone of the BID. That works out to roughly 7 miles of sidewalk. After that, you will almost always find the street team going back and plowing a second and usually a third time. Though snow removal from wall to curb is still ultimately the responsibility of the property owner, the BID Street Team goes well beyond their contracted scope of work to ease property owners’ work of clearing snow. They have developed a relationship with the City’s Streets Department so that, on the nights when the City takes snow away, the BID director receives a call a few hours ahead so the Street Team can push and shovel the large berms that develop during sidewalk and street plowing further into the street for the street department to collect. This additional work is not in the BID’s work plan, but they do it because it makes a big difference. 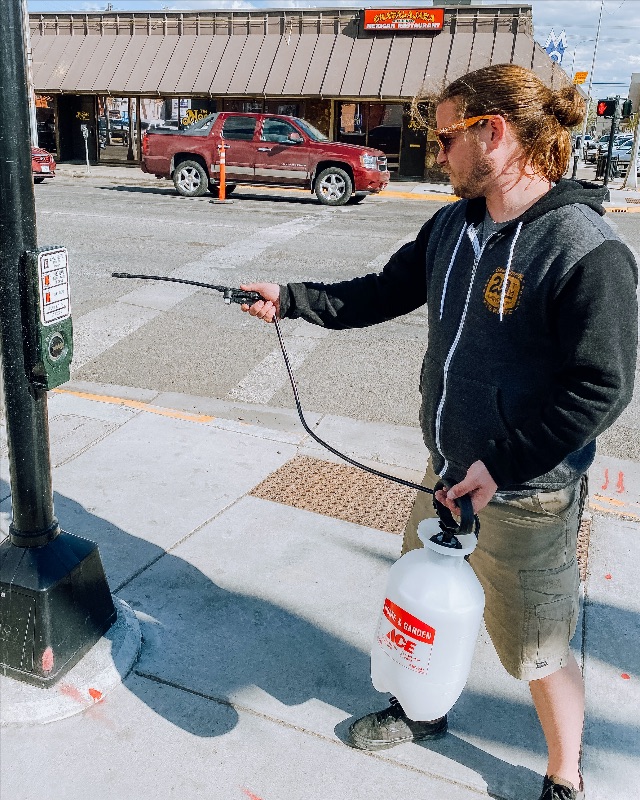 Well there you have it, the 3,000 foot view of what the BID does. We know that is a lot to digest, but hopefully it helps to clarify what they do for you and our downtown neighborhood. The ultimate goal of the BID is to have clean, attractive, safe sidewalks that make downtown a nice place to live, work, play, and eat. With that in mind, please reach out and let the BID Director Joe Stout know if there is anything they can do to help you!