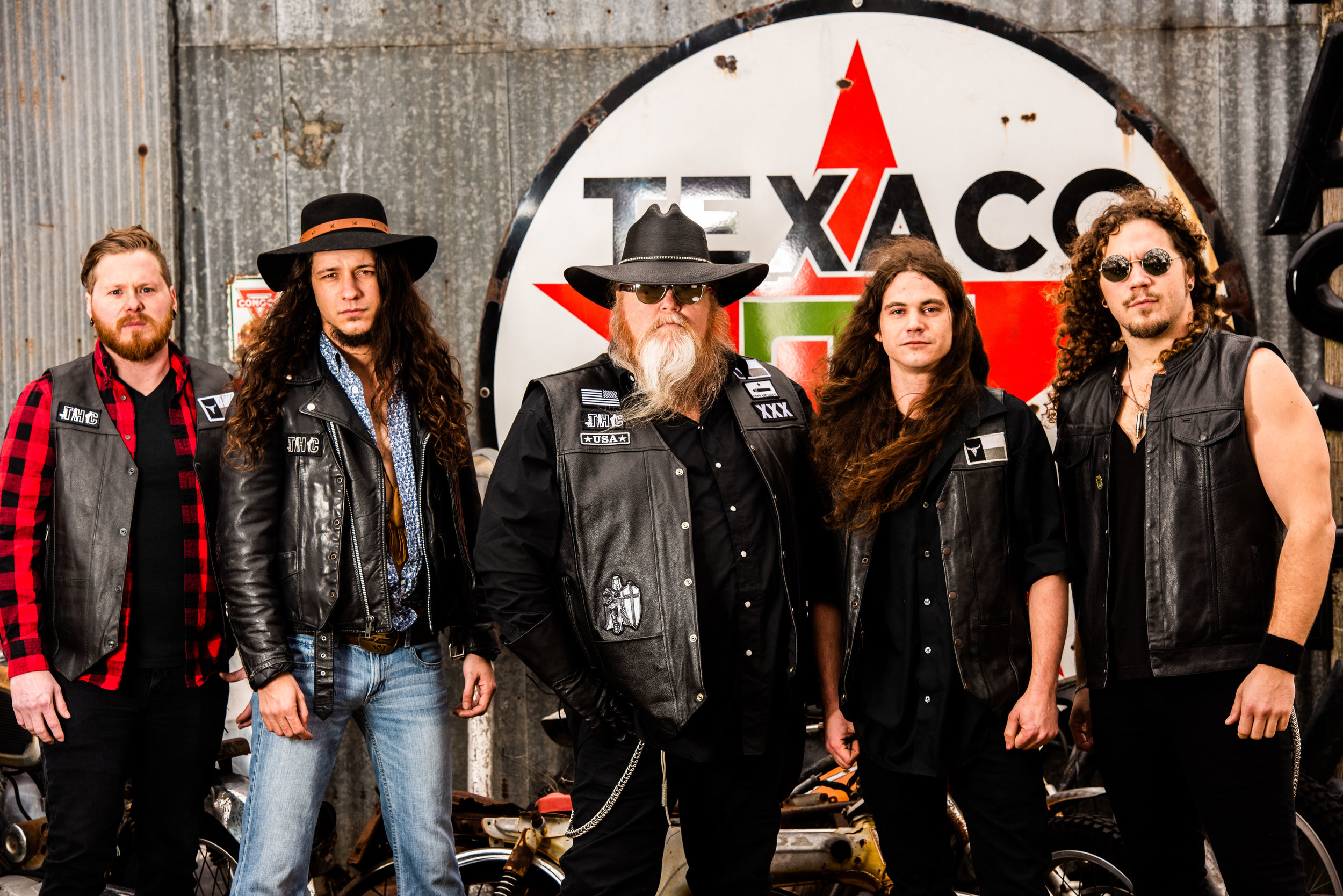 Backyard barbeques, barroom brawls, tent revivals, and big rock festivals alike are suitable environments for the Red Dirt Metal of TEXAS HIPPIE COALITION, a band with a sound so devilishly electrifying that they had to come up with a new genre to describe it.

BIG DAD RITCH captains this pirate ship of bikers, outlaws, troubadours, and hellraisers, welcoming all comers to the THC party with gregarious charisma and Southern charm. Across a half dozen albums, countless club gigs, and show-stealing performances at Rockstar Mayhem, THC has spread the good word of big riffs, big hooks, and wild times.

High in the Saddle is a record full of unashamed, full-throttle ass kicking. It’s the band’s second pairing with producer Bob Marlette (Black Stone Cherry, Rob Zombie) and sixth album overall, on the heels of the No. 2 Billboard Heatseekers slab, Dark Side of Black.

Texas Hippie Coalition sounded just as at home sharing the stage with Korn and Black Label Society as they have been supporting Nazareth, Lynyrd Skynyrd, and David Allan Coe. Country trailblazers like Waylon Jennings and Johnny Cash are essential parts of THC’s lifeblood, intermingled with the Southern swagger of Molly Hatchet and ZZ Top; the Sunset Strip debauchery of Mötley Crüe and Van Halen; the heavy stoner grooves of Clutch and COC; and the metallic Texas-sized crunch of the late, great Abbott brothers.

It’s clear the man can twist a phrase, like when Big Dad Ritch grabs his double-barreled shotgun mic stand and bellows, in his distinctive gravelly drawl, “If you come lookin’ for trouble, baby / Rest assured, you found it / I’m a mountain of a man, baby / And there ain’t no way around it.” Bangers like “Come Get It,” “Pissed Off and Mad About It,” and “Hands Up” are the reason THC is a staple at Sturgis and in clubs all around the country.

His hero was always Johnny Cash, but Ritch had once resigned himself to a quiet life of picket fences and fishing. But then, the stars aligned with Texas Hippie Coalition.

By the grace of God, THC’s gear was left untouched when a storm knocked out two stages at Rocklahoma in 2008. The boys happily lent their equipment to other bands so the show could continue. By the time they played a second set on the festival’s last day, the goodwill had spread. Thousands came to see them and THC blew up from there.

The storytelling of Big Dad Ritch (whose birth certificate reads James Richard Earl Anderson) was front and center in the Red-Dirt-country-meets-hard-rock-and metal bluster of the band’s debut, Pride of Texas (2008) and its increasingly bombastic and hardchargingfollow-ups: Rollin’(2010), Peacemaker( 2012), RideOn(2014), and Dark Side of Black (2016). “Turn it Up” and “Damn You to Hell” even cracked the mainstream rock Top 40.

Ritch puts the band’s evolution in Old West terms. “In the beginning, you’re an outlaw looking for direction. You gotta get the best guys for the job behind you,” he explains. “Now we know how to rob banks, how to rob stagecoaches, and how to rob trains.”

Album number six kicks off with the alarmingly catchy slither of “Moonshine.” It oozes everything THC stands for and smells like. A true THC manifesto, if ever there was one: swampy grooves, Crüe type partying, and a Man in Black style saga. Cash wasn’t the only early influence on Ritch; some kids had Farrah Fawcett posters, but Stevie Nicks was on his wall. He pays tribute to the erstwhile Fleetwood Mac icon with the suitably named “Stevie Nicks,” a tune about a woman with Nicks-like ethereal witchy woman qualities.

Crowd participation is a must for High in the Saddle songs like “Dirty Finger,” a face-melting fireball of fun that works just as well in an arena or with a solitary sing-a-long while speeding down the highway. And for all of the meat-and-potatoes anthems, the band’s sixth offering mines new territory, with the ambitious “Ride or Die” and “Why Aren’t You Listening,” which sees Ritch break ground with an even greater vocal range. It’s a meditation of sorts of appreciation, reflecting on all of the blessings in THC’s world.

“I’m just out of have fun, man,” Ritch says with genuine modesty. “I never look at this as something I have to do. It’s something I get to do. I just thank the Lord above that He has given me this talent that has allowed me to garner these wonderful things in life.”

Texas Hippie Coalition continues to ride or die for truth-telling, unashamed, Red Dirt Metal badassery, winning over new acolytes every damn day. As Blabbermouth once asked: “How many more reasons do you need to try a little THC? Everybody’s doing it.”