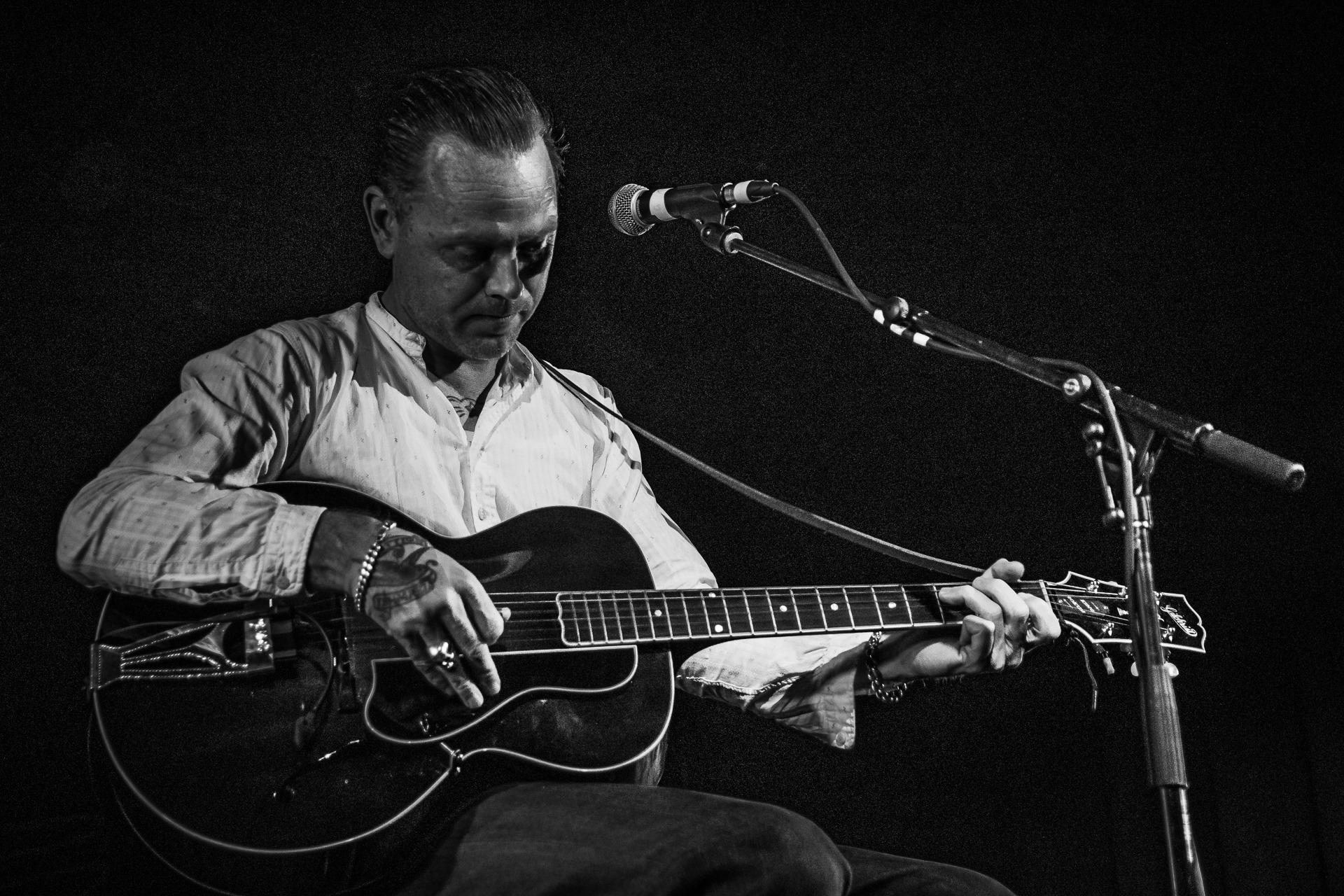 C.W. Stoneking is an artist for whom ‘unexpected’ is probably the default setting. How else to describe such a fine purveyor of American roots music who also happens to be a towering, youthful-faced white Australian man? He surprises first-time listeners, throws curveballs at long-time fans, and everything he does contains at least some background level of bafflement for all involved.

There are multitudes in Stoneking’s music. It’s probably easiest to describe him as a ‘blues artist,’ but the term disguises what makes his music special. There’s so much in there. A 1920s pre-war blues sound is key, but there’s almost equal helpings of New Orleans jazz, jug band music, hokum, country and calypso, and he’s lately brought in elements of jump jive, early rock’n’roll and gospel. His gift is that he brings them all together without anything sounding out of place. He finds the strands that connect all of these different styles and gently braids them together. It’s what he values more than anything: “It’s getting everything to unify really. The music, the flow of it, keeping it moving, with no dead spots. Then I guess having the lyrics and the meaning that flows in that too, you know? Getting it all to knit together in a way that, if you didn’t speak English maybe, you’d still be able to feel the melody, or the sounds of the words. If you did, then the meaning would also flow. That’s sort of what I’m trying to do, I guess.” When so many on the blues scene are trying to sound ‘authentic’ – whatever that is – it’s that unity of sound that allows Stoneking to actually achieve it, and with apparent ease, too. Back in the day, no-one was ‘just’ a blues musician, or a jazz or country musician, and so neither is he.

Stoneking’s work can never really be second-guessed; you never know what you’re going to get. After charming his audiences with acoustic parlour guitars, National resonators, tenor banjos and a band laden with brass on his first two albums, he dropped all of that to go electric with his latest, 2014’s Gon’ Boogaloo, which was all about his Fender Jazzmaster and doo-wop backing vocals. While acoustic is still in his plans, it seems like he’s ditched the banjo for good; he’s been known to go on the occasional but vicious anti-banjo tirade. When I try to ask him about it, he suffices with “I have to be careful with what I say. People get angry about that sort of stuff.” Maybe he’s been advised by his lawyers. Maybe it’s just part of his own epic, enigmatic legend.

Storytelling is one of his most potent powers. That man knows how to spin a yarn. He started his musical life in high school, but asked if he was a blues artist back then, he says: “I wouldn’t have said I was an artist of anything, except for maybe a bullshit artist!” It would seem that never really changed. He has the air of an old vaudeville master, a carnival caller or maybe a market huckster. By 2008, the UK was in the middle of a mini blues boom sparked by the successes of Seasick Steve, and a good story was all-important. Each artist had to have their own romantic blues myth for cachet, and Stoneking had the tallest tales in his backstory, rejecting the down-home believability of the aforementioned Steve for way-out parody. His thing was that he had worked for a time as an assistant to a witch doctor in New Orleans, before getting drunk and finding himself on a ship bound for the Congo, only to get shipwrecked and land on a beach in Gabon…it was a saga that got more madcap and rambling with each retelling. I’m sure I recall hearing some sort of narrative detour to a dildo farm at one point. These are stories to be taken with a bucket of salt.

Naturally, his songs are similarly irreverent and fantastical. His albums are full of tales of talking animals, hoodoo gone wrong and a myriad of characters in unfortunate situations in locations from jail to the jungle to heaven itself. It’s probably easy to tell that a common thread in Stoneking’s music is his humour. If we’re talking about the authenticity thing, it’s one thing that makes him stand out from the crowd. It’s surprising how often musicians today forget how funny a lot of the old-time music really was, blues or otherwise. Almost all of his work is drenched in that humour, whether it be sly innuendo, ridiculous sitcom or his particular knack for extended conversations between fictional friends – the man holds a whole pantheon of personalities under his stylish fedora and slicked-back hair. Simply put, he’s just not so bloody earnest all the time, which is a breath of fresh air to be honest. It also makes the times when he is earnest particularly touching – an example is his straight-ahead ‘Charlie Bostock’s Blues,’ a heartbreaking ode to one of Stoneking’s former bandmates and his tragic end.

How does Stoneking make that world so relevant to his own life? How does Australia impact on his sound? It’s not something he’s really pondered too heavily, but his answer is a musing that takes him off on a ramble about the nature of aesthetics. “When I first was driving around in the south of America, it was the first time I realised the Australian lens that I was maybe hearing stuff through. You know when you’re daydreaming, you hear music and you sort of feel like there’s a landscape emanating from the person’s voice or the sound of the music? Hearing Charlie Patton or Son House sing back in the old days, I realised that the landscape of that internal world wasn’t really the world that those dudes were actually in. It wasn’t cut-down jungle and floodplains and green, which is what it made me think of. It was more like where I grew up: desert, an Australian sort of arid. Which I’d never thought about, and I was like ‘huh, it might be different.’” Maybe his music doesn’t sound Australian, but those experiences as an Australian in Deep South America have informed the sound: that never-quite-real landscape he heard in the voices of blues masters certainly does emanate from his own.

And his voice is probably the most recognisable thing about Stoneking. The accent isn’t quite his own (although he owes that proficiency to his American parentage), but when he speaks, it is in that same soft, slow drawl that caresses his music. With another musician, it could all come across as somewhat tacky and distasteful, but not with Stoneking. He is so deeply immersed in the world that his music conjures that it’s hard to imagine him any other way, somewhat like a Lord Buckley of the blues.

That unique voice of his also has a habit of cropping up in strange places. Really, who else would be better to provide the voice of a gentlemanly vegetable fellow, as Stoneking did alongside Elijah Wood in the charming cartoon short, Tome of the Unknown, in 2013? He could most recently be heard on notorious blueshead Jack White’s album Boarding House Reach earlier this year. Such things are unexpected even for Stoneking himself: his blues skills were not needed here; his contribution is a somewhat opaque spoken-word poem, written by White. “It was all kind of mysterious. I had to wear black and be at this plain-looking building on a certain floor at a certain time. They’d taken all the light bulbs out and put all black lights in. He had this sheet of paper with these words written on it, and I just read it. I didn’t really understand the content of it, it’s just…me talking something I don’t fully understand, or even partially understand. But he was into it, so that was his thing. He sent me the record just before it came out and I was like ‘Oh my god…’ Millions of people are going to hear this and it’s going to be a track that everyone goes ‘what the hell is this? Hit the skip button!’ Who cares, though?”

After such an odd experience, would he ever want to collaborate with other artists in his own work? His answer is immediate, and unsurprisingly surprising: “Kanye West. Yeah, I’d like to make a record with him. He’s about the only one.” That was an answer that hung in the air a bit. Does he care to elaborate on that? “I just like how he puts stuff together, his rhythmic piecing of sounds. I would like my flavour but using his ideas a bit, you know?” He definitely sounds sincere, but there is that bucket of salt from earlier…

Who really knows what is next in store for C.W. Stoneking? He does, maybe, although I wouldn’t bank on it. There was a six-year gap between his second and third albums. It’s already been four years since then, and he says the ideas for the next one are just about starting to emerge from the ether. Band or solo? Electric or acoustic? Old-time blues or some other star in that constellation…or Stoneking x Kanye? No idea. All that can really be certain is that it won’t be what you’re expecting.