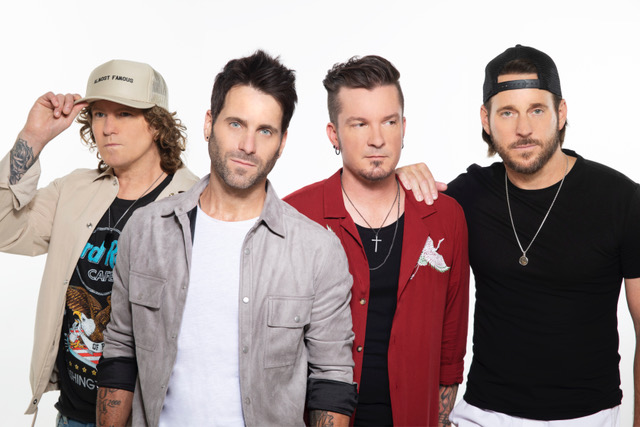 Years before scoring a multi-national No. 1 hit with “Just the Way” — the first single from Parmalee’s 2021 album, For You — brothers Matt and Scott Thomas grew up in the small town of Parmele, North Carolina. Their father was a working musician, and the boys inherited his appreciation for Soul, Country-Rock, and the sounds of the American South. “Dad’s music was a mixture of Gregg Allman, Bob Seger, and Delbert McClinton,” Matt remembers. “We loved that stuff, but we listened to everything else, too. Blues. Beach music. Motown. Once we began making our own music, it didn’t matter what we were trying to play — that Country twang just carried over into everything we did.”

For Parmalee, music has always been a family business. Joined by cousin Barry Knox and longtime friend Josh McSwain, the group began began building an audience in North Carolina before moving to Nashville. Nominated for the ACM’s “New Vocal Group of the Year,” they stood out as something different: a tight-knit family band whose members played their own instruments, wrote their own hits, and created songs that didn’t just nod to Country music’s past, but helped shape its present, too.

A multinational, platinum-certified smash of a collaboration with TrailerTrap creator and “The Git Up” star, Blanco Brown, “Just the Way” topped the charts in 2021. The song mixed Parmalee’s sharp songwriting and vocal harmonies — both of which had fueled the band’s first No. 1 single, “Carolina,” as well as Top 10 hits like “Close Your Eyes” and “Already Callin’ You Mine” — with a modern message of self-love and individuality. A feel-good hit with more than 300 million streams, “Just the Way” helped lay the foundation for Parmalee’s newest album, For You.

“‘Just the Way’ connected with so many people,” says Matt. “I think people liked its message, the positivity and the way it made them feel— like it spoke directly to them. That’s when we feel most authentic and our best as a band—when we feel like we’re having a conversation with the audience. That’s what For You really focuses on. It’s an album for the fans — the ones who’ve supported us for years, and the new ones we’re getting to know every day.”

From the anthemic, arena-friendly rush of “Only You” to the rugged romanticism of “Take My Name,” For You is Country music at its modern-day best. Working with co-writers like Ashley Gorley, Nolan Sipe, and producer David Fanning, Matt Thomas wrote the

majority of the 13-song album during a year that found his touring schedule brought to a halt by the global pandemic. It was a time of regrowth and collaboration. “We didn’t know when we’d be able to tour again, so we just kept writing and writing,” Matt says. “We’re used to always being on the road but staying at home gave us time to focus on who we are as a band and create more songs that narrow in on our connection with our fans. We’re leaning into what makes Parmalee sound like Parmalee.”

Years after Matt, Scott, Barry, and Josh held their first band practice in a tin-roofed barn in rural North Carolina, Parmalee continues to expand the boundaries of Country music. They’re southern hitmakers with a multi-genre twist, creating songs that are every bit as diverse as the music they grew up loving. For You is the latest chapter in a story that’s just getting started — and like any good storyteller, Matt Thomas has learned to turn his personal experience into universal anthems that mirror his fans’ experiences, too. After all, this isn’t just Parmalee’s story anymore. It’s our story.

“If you can write songs that are real — songs that are rooted in the things you’ve experienced, or remind you of a person you once loved, or trigger memories from an earlier time in your life — that’s where you find some real magic,” he says. “That’s what creates a bond and starts a dialogue. With For You, it’s not just an album — it’s a conversation.”