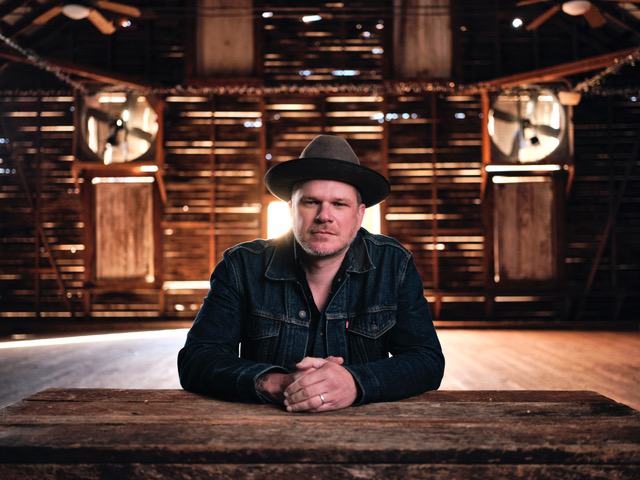 The eighth full-length from singer/songwriter Jason Eady, To The Passage Of Time first took shape in a frenetic burst of creativity back in the doldrums of quarantine. Over the course of a three-day period last August, the Fort Worth, Texas-based musician wrote more than half of the album, locking himself in his bedroom and emerging only when he felt completely burnt out. “I went in thinking I was going to write just one song—but then the songs kept coming, and I didn’t want to break the spell,” he recalls. “I’d go to sleep with the guitar by the bed, pick it back up when I woke up the next morning, and do it all again. I’d never really experienced anything like that before.”

With its nuanced exploration of aging and loss and the fragility of life, To The Passage Of Time arrives as the Mississippi-bred artist’s most lyrically complex and compelling work to date. As Eady reveals, the album’s understated power stems in part from the intentionality of the recording process, which involved enlisting Band of Heathens’ Gordy Quist as producer and gathering many of Eady’s favorite musicians he’s played with over the years (including Noah Jeffries on mandolin and fiddle, Mark Williams on upright bass and cello, and Geoff Queen on Dobro, pedal steel, and lap steel). “I really love egoless players—people who know how to serve the song,” notes Eady, who recorded at The Finishing School in Austin and made ample use of the studio’s goldmine of vintage gear. “We started every song with just me on guitar, and if someone felt like they had a part to add, they had to come forward and say what they heard there. Everything was built from the ground up, and because of that there’s no filler—nobody playing to show off or take up space.”

The follow-up to 2018’s I Travel On—an album that “overflows with enough spontaneous energy to power a fleet of Ford pickups,” according to NPR’s glowing review—To The Passage Of Time shows the full force of that approach on the hard-driving lead single “Back to Normal.” Like all of the album, “Back to Normal” was recorded live with no overdubs, bringing gritty guitar work and galloping rhythms to an urgent meditation on the inevitability of change. “I wanted to write about how, when things get disrupted, you can never really return to the way they were before,” says Eady. “No matter how big or small that disruption is, you have to accept that change is a fundamental part of life, and just keep moving forward.” The result: an immediately catchy track that’s pragmatic but hopeful, proving Eady’s gift for turning uncomfortable truths into songs with a potent impact.

On the album’s exquisite centerpiece “French Summer Sun”—a devastating epic astoundingly captured in the very first take—Eady shares one of his most riveting pieces of storytelling yet. “My grandfather fought at Battle of Anzio in Italy in World War II, and a few years ago on tour I went to visit the beach where the battle took place,” says Eady. “I was struck by how small the beach was—I realized that if my grandfather had made one wrong move he would’ve been killed, and I wouldn’t be standing there thinking those thoughts. I ended up writing this song about how when someone dies in war, it isn’t just killing that person: it’s killing the generations of people who would have come from them.” Building to a shattering plot twist in its final moments, “French Summer Sun” drifts between its somberly sung chorus and spoken-word verses, attaining an unlikely transcendence as Eady sheds equally poignant light on the horror of war and the ephemeral beauty of everyday life.

One of the more lighthearted tracks on To The Passage of Time, “Saturday Night” muses on the early days of Eady’s career, when he and fellow Texas-based country artist Cody Jinks spent many a night playing sparsely attended gigs at Lil’ Red’s Longhorn Saloon in Fort Worth. “When you’re just getting started as a musician and nobody knows who you are, there’s a lot of nights when you’re mostly playing to the bar staff,” says Eady. “I was trying to set the scene of playing to an empty room, and what that really feels like.” Co-written by Eady and his wife Courtney Patton (also a singer/songwriter), “Saturday Night” channels that spirited frustration in moody guitar riffs and soul-stirring vocals, subtly taking on a momentum that’s undeniably exhilarating.

In a particularly meaningful turn for Eady, To The Passage Of Time closes out with its confessional title track, a piece he regards as the album’s most personal offering. “I turned 40 a few years ago, and this song is me talking directly to time about some of the realizations I’ve had since then,” he says. But while the lyrics to “To The Passage Of Time” reflect a rueful awareness (“I still remember when I thought you were my friend/You made me feel like this never would end/Now I am older and I finally see/That you’re a little indifferent to me”), the song’s dreamy steel tones and luminous harmonies ultimately summon a certain quiet glory.

A near-lifelong songwriter who names Merle Haggard, Guy Clark, and Willie Nelson among his main inspirations, Eady grew up in Jackson and got his start performing in local bars at age 14, showing his natural grasp of everything from soul and R&B to blues and country. After some time in the Air Force, he moved to Fort Worth and started playing open mic nights, where he quickly built up a devoted following. After independently releasing his debut album From Underneath the Old in 2005, he expanded his touring radius and continued turning out critically praised work, including 2012’s AM Country Heaven (a top 40 debut on the Billboard Top Country Albums chart), 2014’s Daylight/Dark (an album that “belongs on a shelf next to Dwight Yoakam’s Buenos Noches from a Lonely Room, Joe Ely’s Letter to Laredo, and yes, even Willie Nelson’s Phases and Stages,” according to AllMusic), and his self-titled 2017 effort (hailed by Rolling Stone as “[h]eavily steeped in his storyteller lyrical style and cleverly framed by uncluttered, acoustic-rich arrangements”). Through the years, Eady has also made his name as an unforgettable live performer, sharing stages with the likes of Sturgill Simpson, Band of Heathens, and Reckless Kelly.

In creating To The Passage Of Time, Eady incorporated several songs born from a songwriters group that started up during quarantine, including Patton along with artists like Brent Cobb, Adam Hood, and Jamie Lin Wilson (who also joined Patton in contributing harmony vocals to the album). “In the early stages of quarantine we realized that nobody was getting any writing done, even though we all had so much downtime,” he says. “We started this group and gave each other prompts to try to turn out a song a week, and it really helped get rid of that paralysis we were all feeling.”

Looking back on the making of To The Passage Of Time, Eady points to such unexpected moments as the recording of the album-opening “Nothing On You.” “Apart from my guitar, the only two instruments on that song are cello and steel guitar—which is a combination I’d never heard before, and gave it a whole new character that took my breath away,” he says. But for the most part, Eady achieved a rare outcome in the album’s production: a direct expression of his deep-rooted and highly specific vision. “I write my songs on acoustic guitar, so sometimes in the studio things take different turns and end up not really matching with what you had in your head,” says Eady. “But because of the approach we took with this album, there’s hardly anything that came out different from what I’d envisioned. This is 100 percent the album I hoped I would make.”