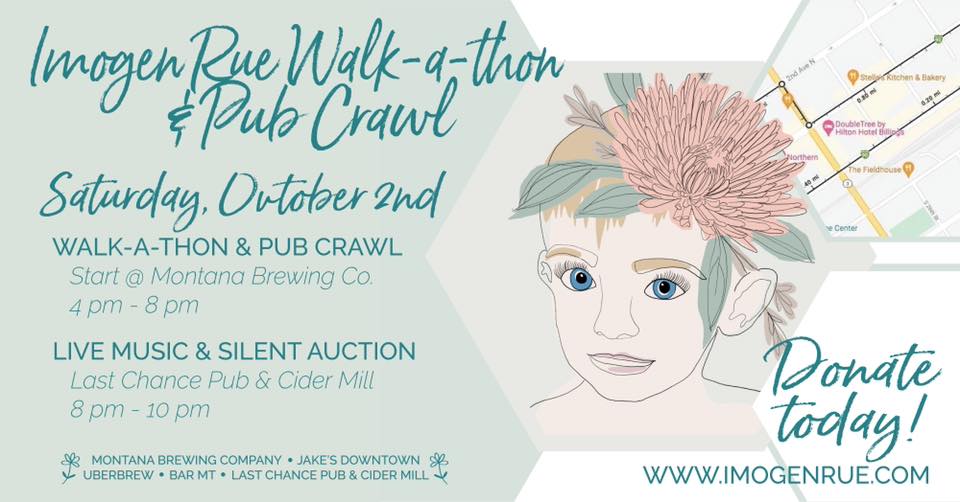 We are calling upon the Billings community to walk or crawl, in Imogen’s honor. The Imogen Rue Walk-a-thon & Pub Crawl will be held in downtown Billings on Saturday, October 2nd.

Supporters are invited to walk one mile or 26 miles. The route will pass various breweries and bars that will be donating to the Hutchinson family and end with a celebration that includes music and silent auctions items at Last Chance Pub & Cider Mill.

Imogen Hutchinson is a beautiful and happy 1-year-old, born in Bozeman, MT. Her parents, Hannah and Travis, both grew up in Billings. Like any other toddler her age, she enjoys music, snuggles, stickers, laughter, Facetiming her family, and of course, Baby Yoda.

In December 2020, Imogen began showing symptoms that her little body was fighting a battle. Since then, her family, many experts, and doctors have been working around the clock to find a diagnosis. In the meantime, she has undergone various treatments and continues to fight and show the world her resilient personality.

Recently Hannah and Travis have turned the sole focus on being with Imogen as much as possible. They are surrounding her with all the love, prayers, and positive thoughts she could ever need. As they turn to little or no work and a longer stay in Seattle than anticipated, we want to make sure their needs are met as they support Imogen.

We are asking you to open your hearts to the Hutchinson family by joining us for the Walk-a-thon & Pub Crawl!